I am defining the “intermediate years” as the years between 1818 and 1833, when Johannes came to America.

I received an email from Max last week (Oct. 2012) that lends a great deal of insight into Johannes during this period.  The first thing he told me was that Johannes was not a felon!

In 1994 I received the following letter from the State Archives of Argau.   This is the canton (country) where Rein is situated.  In this letter I was told Johannes had been arrested and prosecuted for stealing wood. 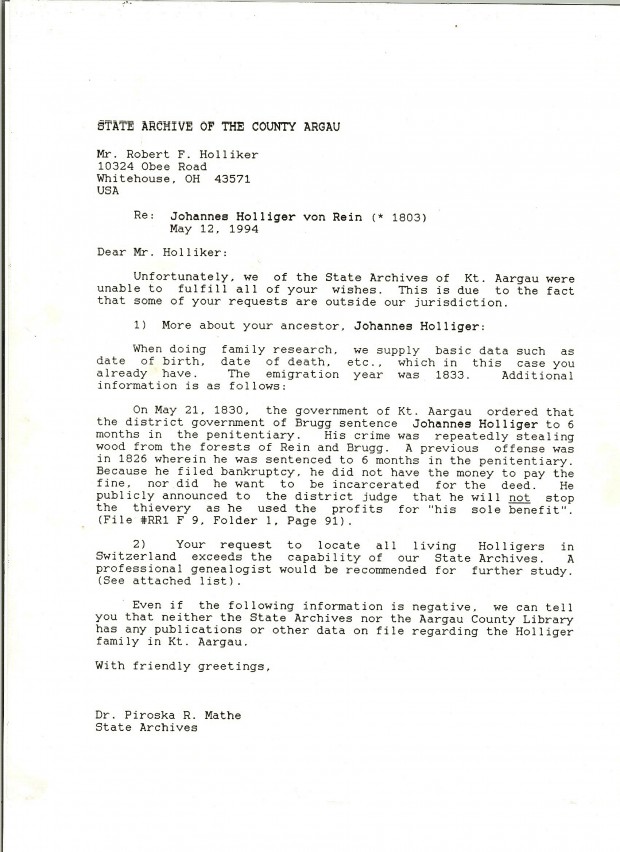 Well, in Max’s email, he tells me that, in actuality, the ‘Johannes’ referred to in this letter was a cousin of (our) Johannes’ father.   Whew!  He then goes on to tell me a bit more about (our) Johannes’ life before he left Switzerland.

The elder Johannes was very ill.  In 1806 the community of Rein had to provide money for his doctor and pharmacy bills.  After his death, in 1807, Maria was able to make a little money by spinning cotton and doing odd day labor jobs when she could find work.  They were very poor.

In 1810 Maria remarried, to Jakob Bachofner.  When they relocated to Birrhard, the community of Rein was still responsible for providing money for the kids’ lodging, food and clothing.    (I found this kind of interesting…)

After finishing school, the council of Rein felt it time for Johannes to find a profession.  So in 1818 he was sent to the master tailor, Johann Kasper Hirt of Lauffohr to study and learn the trade of sewing.  This took about 2-3 years.  Upon completion of his education, Johannes “may have gone wondering around, working here and there” as was the tradition in Switzerland at the time.  It is also thought that during this time he entered and completed his military service.

After he bought the house, his mother – widowed again – and his brother moved in with him.  His sister had married in1 824.  At this time, Johannes worked as a tailor, as a part-time farmer of a small plot of land, and a day laborer.  But he probably realized that this was the best “it was going to get,” so he decided to emigrate to America.

In 1833 he sold his house to his brother for 751 Francs, and began his trek to Whitehouse, OH…

This entry was posted in Family and tagged Johannes. Bookmark the permalink.