I befriended Louise when I began looking for an airline “interview suit.”  For whatever reason, there was an instant connection between us – a connection, and friendship that remains today.

After her job at the clothes store, she took a job as the noon receptionist at a local restaurant, “Mama’s Cafe.”  Mama’s was a great place to eat.  Often, after I retired from the Air Force, I would plan my day to where I could stop by after the lunch hour rush and have a beer with Louise.  I would have a beer; she drank coffee or tea – and we would talk. 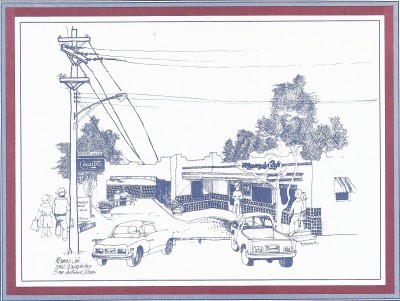 One afternoon I got there a bit early, so I sat at the bar to have a beer.  I was still looking for work and all of a sudden I had an idea…

At the end of the evening at Mama’s they would toss the beer bottle caps from the day out into the yard. 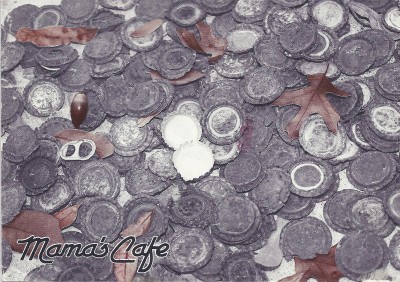 I thought it might be a great job to just sit outside on a bench during the evening, drink beer, welcome folks and toss the caps directly onto the ground!  Cut out the middleman if you will.  So, I asked for a job application, and filled it out as I sat there waiting for Louise to get off work.

References:  Numerous; can all be found in the Auger In.

Any Special Job Requirements:  Probably a ride home at the end of the evening.

I gave the application to the bar-keep, and forgot all about it – until I received the following letter: 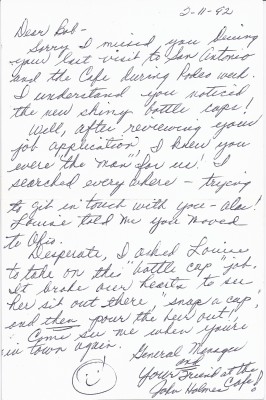 The note came with 2 ‘free’ burgers, with fries and a drink.

(Do you believe I save this stuff?)