One night at Korat RTAFB (Royal Thai AFB) we decided we wanted to have a campfire.  We had been drinking for a few hours, it was dark and it just seemed like the thing to do.  So, we cleared an area just outside our center hootch, in the yard between our rooms.  Then we dug out a small pit and it wasn’t long before we had a lovely fire.  Not a large roaring fire mind you; but just a nice-sized campfire – and soon the stories began flowing.  All was well… until the cops showed up! 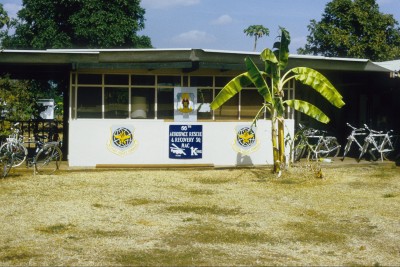 I don’t remember them walking up to our fire pit – they just materialized.  A couple captains from the hooch next door to us.  The guy in charge advised us that we had an “illegal fire” and that we would have to put it out.  We were clearly in violation of Air Force regulations.  YGBSM!

We tried all sorts of arguments to get these two guys to give us a break, but they weren’t hearing anything of it.  In the final analysis, here you had two non-rated guys with an opportunity to dump on some aviators – with the support of Air Force regs behind them.  No way were we going to “win.”  After some going back and forth, we finally got them to agree to let us let the fire burn out vs. extinguishing it.  We told them we would not add any more firewood to it, and that we would just let it burn out.  They were cool with that.

As they headed over to their hooch, John E. got up and headed “out.”  We didn’t pay much attention to him, until he returned with a set of chocks.

(Aside:  Every USAF vehicle that has flightline access has to have a set of yellow, wooden chocks to put under it’s wheels when it is parked on the flightline.  These chocks are are secured to each other with a length of rope, maybe 2 feet long.  They are typically carried in the bed of the pickup, as in the case of our two visitors that night.)

As it turned out John had gone over to the cops’ pickup and retrieved their chocks.  He then casually tossed them in the fire.  Those chocks were not ‘firewood,’ per se; and they added such a nice ambiance to our campfire!

(I want to credit my roomie, Alan K., for reminding me of this story!)  The last thing I remember about it all is, seeing the remnants of burnt rope laying outside the fire pit when the two cops returned an hour or so later – to check on us.  The fire was drawing down, but that damned rope was there to give us away!  Fortunately they didn’t pick up on it…

This entry was posted in Uncategorized and tagged Air Force Regulations. Bookmark the permalink.