Mikey kept his snake in a closet above his locker.  The upperclassmen knew his snake was there – or at least they thought they did, but no one was brave enough to look!  So it became more or less an “agreement.”  Mikey could keep his snake, if it ‘wasn’t there.’

All was well until he received a letter from his Mom one day  Toward the end, she had to tell him that his snake died.  She went on to tell him that she wasn’t sure how to dispose of it, so she decided to feed it down the garbage disposal!

Mikey told me his Mom was a ‘short woman,’ so I imagined… 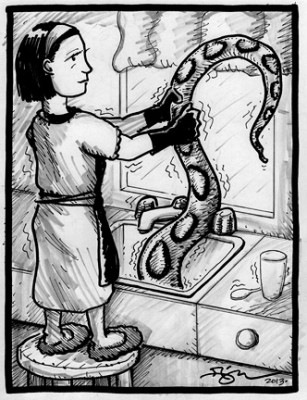