In 1963 we lived in an apartment complex at 18 Floridastrasse in Wiesbaden, West Germany – base housing.  Our apartment was on right side of the complex, on the second floor. 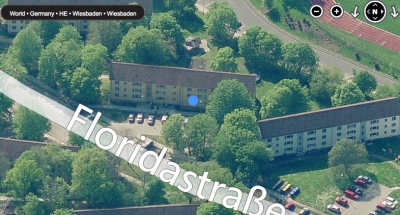 At Christmas that year, Dear Ole Dad bought our tree and brought it home.  This in itself, was no easy task.  The German Christmas trees weren’t cut quite like the American Christmas trees we were accustomed to.  At any rate, after a couple hours of searching, he found one and was very proud of it – until he got it home, upstairs, and into our apartment.  Then Mom informed him that it was ‘ugly!’  Wrong thing to say to Dear Ole Dad – especially when he had been drinking!

He stood back and took a look at the tree himself for a moment.   Then without saying a word, he took it, opened the sliding glass door and tossed it off the balcony!  Down two floors it went, splattering on the ground below, eventually coming to rest there in the dark.  “You’re right,” he proclaimed, “it is ugly!”   He fixed another drink and settled down at his place at the head of our dining room table – just staring at his drink.

“I’ll bet there are children in this world who would love to have that ugly Christmas tree,” he remarked, without looking up.  And we all became quiet, thinking about what he had said.  “And now that ‘ugly’ tree is laying down on the ground, all by itself – out in the cold,” he added.  He had a way about himself, when saying things like this, that could ‘bring out the tears.’

“Oh crap,” Mom thought, and then she sent my brother Bill downstairs to retrieve our Christmas tree.

So Bill grabs his jacket and goes down to get our ugly tree.  He drags the it around to the front of our building and then up the stairs back into our apartment.  Dear Ole Dad then sets it into the Christmas tree stand, and we all stand back – to have a look at it.  It is ugly, that’s for sure… and off the balcony it goes, again.  This time with the tree stand!

And yep, Dear Ole Dad fixes another drink.  He then again takes his place at the head of the table, staring into his drink.  After a while of contemplation he says, “I’ll bet Jesus would have liked that ugly tree.”  Reflection, then more tears…

“Aw crap,” Mom says once again, and Bill reaches for his coat.  Once the name of Jesus was invoked, who could leave a tree out in the cold?  Even an ugly one?

Bill drags it back around to the front of our building once again, and then up the stairs and back into our apartment.  This time the tree makes it to where it is suppose to sit, and we all begin to hang ornaments on it.  Hanging ornaments on that tree was kinda like putting lipstick on a pig.  It just wasn’t going to get much better.  And of course, two trips off the balcony didn’t help either…

And this was “my normal” growing up… What?  LOL!

This entry was posted in Family, Wiesbaden AFB, West Germany. Bookmark the permalink.