Sarcasm, Cynicism and Beer can, Save Lives

In 1985 I was the Chief of Standardization (Stan/Eval), 12th Flying Training Wing (FTW), Randolph AFB, TX.  That Spring the fine folks at HQ ATC decided to have a 2-day “risk assessment” conference at Randolph.  Swell.  The project officer was Lee N., a T-37 “Tweet” pilot.

The conference was set to begin at 1300 on the first day.  That gave everyone time to arrive, shower and change clothes (from their flight suits into their “Ice Cream Suits” (summer Blues)).  It also gave me time to fly a local sortie, and not change into anything.  Matter of fact, I took a ‘perverse sense of delight’ in being the only one in attendance, in my flight suit!  But I diverge…

During the introduction Lee mentioned that one of the greatest T-38 “risks” was the T-38 Final Turn.  To make his point, he mentioned that ATC had lost T-38 at Sheppard AFB, TX just that past January.  The IP and student were killed in that accident.  I distinctly remember sitting there that afternoon, thinking to myself, “You dumb shits; we are losing jets probably because we aren’t teaching T-38 stall and/or sink rate recovery correctly!”

It was a “gut reaction”  that turned out to be ever more correct than I realized at the time.  And from that point on I transition into an “auto-nod” posture for the remainder of the day – thinking about how I would restructure our T-38 stall/sink rate recovery training, if given the opportunity.

In 1985 you could drive with an “open container” in Texas; you just couldn’t be drunk while driving.  Made sense to me, at the time.  So, I picked up a ‘2-pack’ of Bud Light on the way out of the base, to “contemplate” how I would restructure T-38 stall/sink rate recovery training on the way home.  By the time I got home, I had a fairly decent idea about how to go about it…

The first thing I did when I got “released” from that conference was, I swung by HQ ATC Flight Safety.  I had worked in Flight Safety a few years before and had an idea of what I was looking for.  I had called ahead and asked Jim Board, the ‘Records Guy,” to pull all the T-38 stall/sink rate accident reports – from when we first began flying T-38s.  Jim was a great guy, and had everything ready for me when I showed up.

I  soon discovered that since we began flying the T-38 operationally we had destroyed 42 aircraft and killed 39 pilots in stall/sink rate accidents!  That just confirmed my earlier “gut feeling.”  Then I began to really get into it.

I first constructed a matrix that was very enlightening: 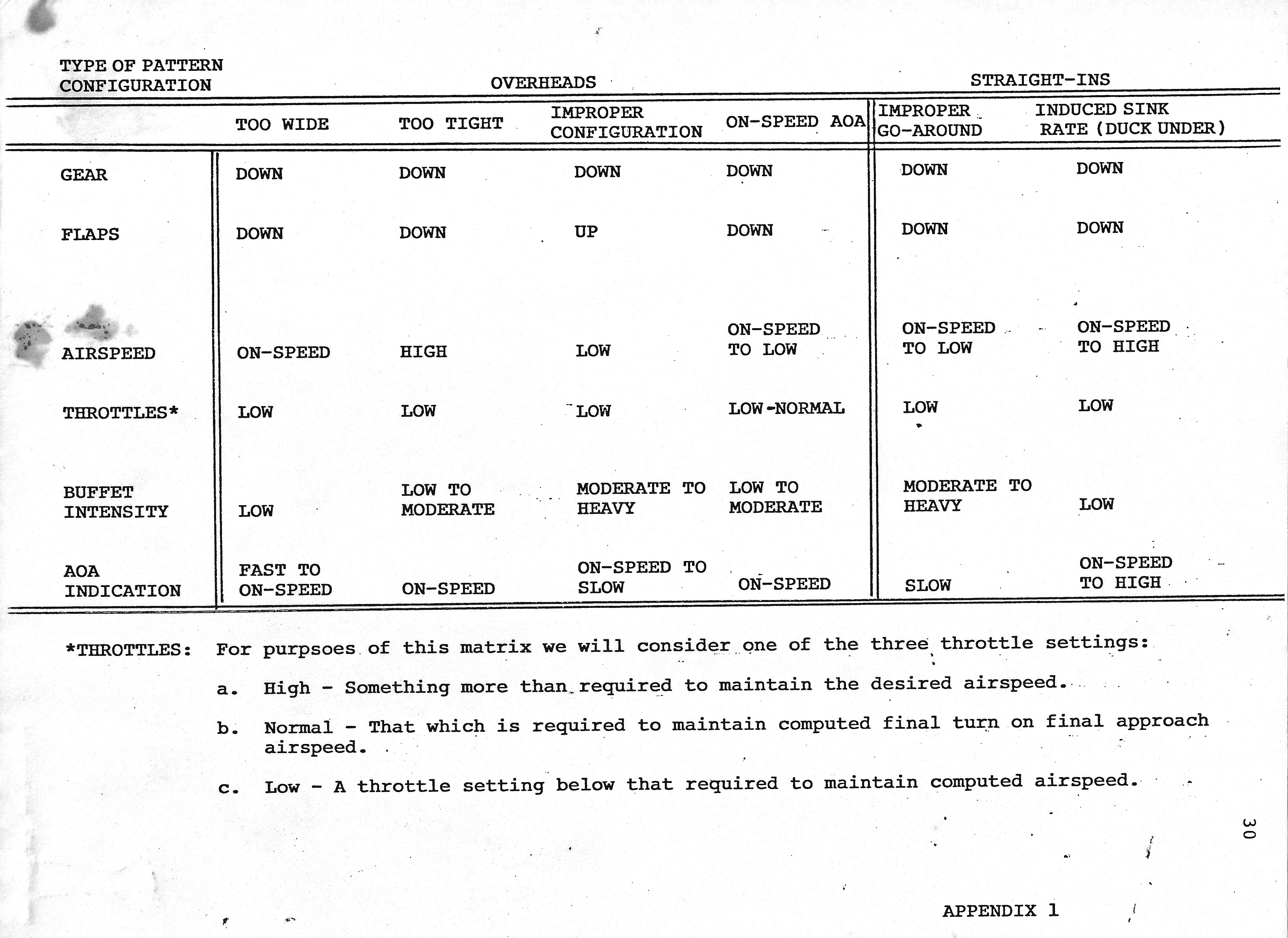 This revealed that the “common denominator” of all these accidents was the throttle setting at the time of the accident:  Low.  This then, is what lead to the high sink rates and eventual stalls.

I then set about developing a ride that would specifically address T-38 stalls and sink rates.  I modeled it after a ride in the T-37 program at the time: the Spin Ride.  (In the late 60’s there had been a number of T-37 spin-related accidents, and the solution was a non-graded Tweet sortie that did nothing else other than explored T-37 spins and spin characteristics.)  The answer to me was obvious!

As the Chief of Stan/Eval at the time I could get a jet just about any time I wanted to, and as often as I wanted to.  So, I began to put together a T-38 stall/sink rate ride profile.  In doing this I “picked the brains” of the most experienced T-38 IPs on station.  And soon, it all began to come together.

As it was at this time, I was also about to complete my Master’s degree in Management.  I asked and was given permission to write my exit paper on ‘The Management of T-38 Stall Training.’  Bewdy!  So, in the late summer of 1985 I submitted my paper to Webster’s University, and to HQ Air Training Command.

I received an “A” from Webster’s and a lot of resistance from HQ ATC.  The ‘PC Pretty Boys’ – the Staff Queers – weren’t sure of the idea.  First of all, it didn’t come from one of “them.”   Then the thought of a “non-graded” ride in the T-38 drove them nuts.  But on the other side of the ledger, I kept hammering them with, “If our T-38 stall/sink rate recovery training is so great, why are we still killing folks 23 years after we began operationally flying it?”  Then I reminded them of the ‘precedence’ with the T-37 Spin Ride.  And in the end, I prevailed!

The ride was formalized in the Fall of 1987, and is still being flown.  Before I left San Antonio in 1991 I was down in the Auger In one night (the bar that used to be a ‘pilot’s bar, and is now a shoe clerk’s bar)  and 1st Lt. T. B. came up to me.  He told me, “Sir, you don’t know it, but you saved my life.  A few weeks back I was in the final turn with a student and we entered a sink rate.  Because of that ride I flew with you, I recognized it right away and executed a recovery.”  What more could I ask for than an endorse meant like that?

So you see, on occasion, sarcasm, cynicism and a little beer, can save lives!

This entry was posted in Interesting Stuff, Just Things I Notice, USAF. Bookmark the permalink.