I have a pair of book ends in my house that were given to me as a ‘going away’ gift in June 1980.  They are made from a set of T-38A main landing gear tires. 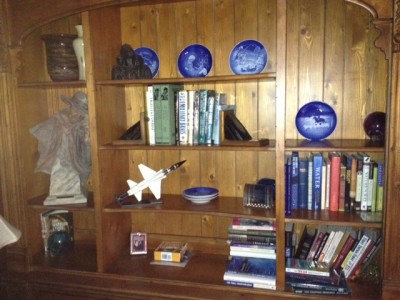 Is there a ‘story’ behind them?  Oh yeah; and a story that humbles me even to this day…

In late March 1980 I was tasked to fly as a “seeing-eye IP” for a 2-star general.  We were returning to Randolph Field with the weather reported at; 200 overcast, 1 mile visibility with drizzle and fog.  The general was flying from the front seat.

The weather that day throughout South Texas was such that once we began an approach we would not have fuel for an alternate.  Once we committed to the descent and approach, we would be committed to landing.

The general I was flying with was a former Fighter Pilot, and quite capable.  Good hands.  But still, I was a bit apprehensive.

The descent and ILS approach went “textbook.”  Then on short final, the general asked me a simple question.  “Bob,” he asked, “do we aerobrake on wet runways?”  We were near minimums at the time, and I was focused at finding the runway.  Without lending any thought to the question, I replied, “No Sir, just put her down and begin braking…”  Dumb!

We broke out of the weather and he landed within the first 200-300 feet down the runway.  Then he lowered the nose, and the fun began.  I actually felt the aircraft ‘rise’ up on the standing water.  Not good; and from that point on, we were just ‘along for the ride.’

First the right main tire blew, followed shortly thereafter by the left tire.  I actually felt each tire blow.  The general then remarked something like, “Bob….” and I got on the brakes with him, as we were not slowing a bit.

I have no idea how much our heading changed as we slid along the runway, but I know it was significant.  30-45 degrees?  I don’t know.  I wasn’t at all scared, I was too busy on the brakes.

As we slowed, directional control became somewhat ‘sporting.’  We subsequently came to a stop about 20 degrees off runway heading, about 300 – 400 feet from the end of the runway.  I called the Tower and reported two blown tires as I cautiously opened my canopy.  It was if I were hoping they were still inflated, but I knew different.  The general attempted to taxi clear of the runway when I informed him that “they” really didn’t want us to taxi on blown tires.  I think he was pissed, but he didn’t say anything!

I then called back to the squadron to inform them of our predicament.  The SOF (Supervisor of Flying), was a friend of mine and said something to the effect, “Yeah Bob, we saw you sliding by.”  He then went on to tell me that the squadron commander was on his way out.  It took every bit of discipline I possessed at the time not to ask him, “Is he bring two new tires with him?”  Thought I would let that one slide…

We got out of the aircraft and the general took off.  I got a ride in to the squadron with the squadron commander.  As I headed off to the chute room to hang up my gear, he said, “Bob, get a cup of coffee and then come down and tell me what happened.”

Many thoughts raced through my mind.  “It was the general’s fault.”  “I don’t know what happened.”  George Bush wasn’t on the scene yet so I knew I had to ‘take the hit.’  And the reality is, I wouldn’t have done it any other way.

I walked into his office, sick to my stomach.  He came out from behind his desk and we sat down.  I looked at my coffee, then up at him and said, “Col. O., I just screwed up.”  And I proceeded to tell him about the chain of events leading up to the landing.  He was so gracious.  He thanked me, and that was all I ever heard about the incident from him.

When I got back to the shop, it was a different story.  I was working at HQ ATC Flight Safety at that time.  They were ‘brutal.’  There is nothing worse than taking crap from peers in a flying unit when you screw up…

My boss at the time, suggested I submit a “Hanger Flying” article for our monthly Flight Safety package for the field.  With the help of Mikey, this is what we came up with:

The Wet Runway Reel
To be chanted with the appropriate knee-slapping and foot stompin’.
Straw hats optional.

Chop the power, lower the nose,
Mash the brakes and there she goes!

Half-way down at a hundred per
Markers passing in a blur.

Ziggy this way, ziggy that,
Now my right main tire is flat.

Into a skid, speed’s too hot,
Now my left main tire is shot.

A call to the SOF, a call to Ground
Watch them fire trucks circle round.

Sittin’ at the end, inna lake,
Now I remember to aerobrake!

I have kept those tires over the years; not so much to use them as book ends, but to remind me every now and then that I am not perhaps as “good” as I think I am… I still look at them in this vain today upon occasion… 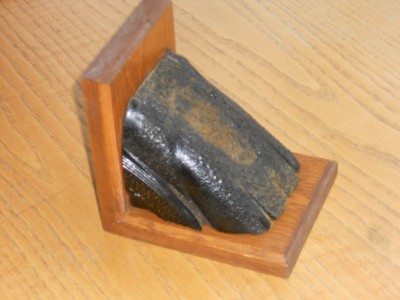 This entry was posted in The Book and tagged USAF Flying. Bookmark the permalink.