My name is Bob Holliker.  I am writing to propose that the Village of Whitehouse pass a Resolution to recognize the sacrifices and service of Military Children – of Military “Brats” to our village, to our state and to our country.

There are approximately 15,000,000 present and former Military “Brats” in our country at any given time.  We have served our country for generations.  In Pat Conroy’s Introduction to Mary Edwards Wertsch’s book, “Military Brats: Legacies of Childhood Inside the Fortress,” he observes, “…military brats, my lost tribe, spent their entire youth in service to this country and no one even knew we were there.”

Five years ago I suggested to Mr. Bob Latta, R/OH, that he introduce legislation to the Congress, to recognize Military Kids for their service to our country.  To his credit, he did.     H.R. 5333: Children of Military Service Members Commemorative Lapel Pin Act, May 2010, (2).  That legislation has sat “in committee” for almost 5 years now, in one form or another, going nowhere.

Recently I learned of an organization, “The Little C.H.A.M.P.S.,” who’s stated objective is to “bridge the gap between military families and their civilian neighbors.  On the surface, a great idea.  However, when you look deeper into the organization there are some disturbing revelations.

C.H.A.M.P.S. is an acronym for “Child Heroes Attached to Military Personnel.  Well Ms. Kuhn, as a “Brat,” I am not a hero.  And I sure am not “attached” to anyone!  This name was created as a marketing tool.  The book they use, “The Little C.H.A.M.P.S.” was originally titled “The Little Brats.”  However the organization could not procure funding nor support with using the term ‘Brat.’  There are elements, both within the military and the civilian communities, who object to the term “Brat” used in the context with military kids.  And often they hold powerful positions.  Up until now, we (Brats) have known of them, and for the most part, have ignored them.  But we can not ignore them anymore.  They are threatening our Heritage now.

In the C.H.A.M.P.S. literature they claim that they are not out to “re-brand” Military Brats, then we see this: 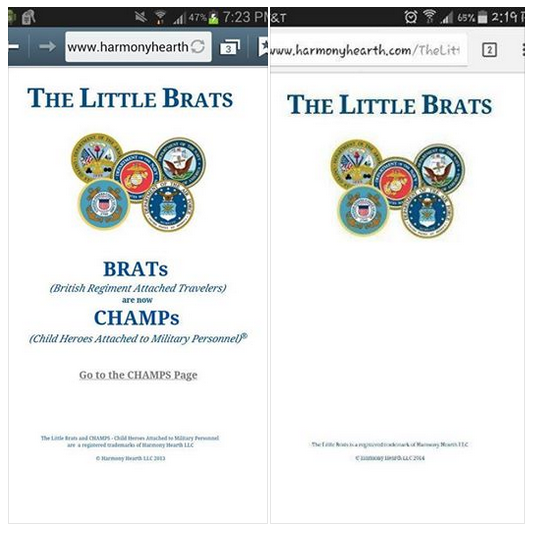 (And by the way, their use of the respective service seals is illegal by US Trademark law.)

So, what’s the big deal?  Being a “Military Brat” is a term of Endearment to many of is, to MOST of us.  It’s a term we EARNED!  The distinction is a “brat,” in the contemporary sense, is a ruffian, a hooligan and the like.  “Brats” are patriotic, loyal, resilient, tenacious, charming and good looking.  (Also humble.) 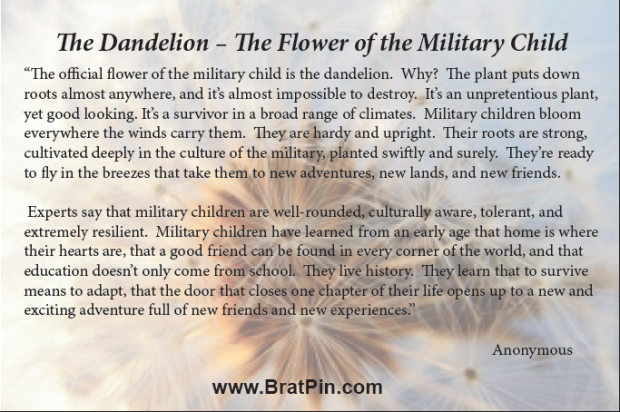 A couple days ago I was approached by the mayor of another village here in NW Ohio.  They want to introduce a Resolution to recognize Military “Brats” for the reasons I described above.  I am so humble, and grateful with the gesture.  However I am “of” Whitehouse.  I was born at Mercy hospital, and brought home to Whitehouse 4 days later.  I then left Whitehouse in 1950 when I was 4.  For the next 13 years I travelled all over the world, often telling people I was ”from” Whitehouse, OH.  But the reality is, I am “from” nowhere.  I attended 11 schools in 12 years; 4 high schools in 3 countries.  I grew up on 7 Air Force bases, two of which are now gone.  I have carried the Pride of being a Military Brat in my heart for all these years.  If this organization is successful in relegating my Heritage to an obscure footnote in military history, where will that leave me, and millions of others?

What’s in a name you might ask?  Everything.  Ask an Anthony Wayne ‘General,’ or a ‘Buckeye,’ or an Afro-American or a Marine.  “Once a Marine, always a Marine.”  We feel the same way…

Our initiative here, to be recognized as “Military Brats,” is beginning to take off on the national stage.  A Huffington Post article came out earlier in the week (3).  I would love to see a Resolution such as I have proposed, from my hometown, recognizing us as “Military Brats,” acknowledging the pride we take in our service to our country.

Flying jets in the Air Force is only “what I did,” being a “Brat” is who I am…

I am more than willing to discuss further, if you would like.

This entry was posted in Military Brats. Bookmark the permalink.