A ‘PS’ to Colonel Thompson…

This is a recent exchange I had with a guy who posted a comment on my post here, on Colonel Hadley Thompson (https://www.lonelypilotbob.com/?p=1448).

“I would like to contact the gentleman who wrote this about Col. Had Thompson. If you would please email me.”

The ‘author’ would be me;

This might seem odd to you but I was wondering if you might be located in the San Antonio area.  I am stationed at Fort Sam Houston and I have something of COL Thompson’s that I want to give to you.  If you are local, I could bring it to you, but if not, give me your address and I’ll send it.  You would be one of the few people who would appreciate this and it would probably take you for a nice trip down memory lane.

Looking forward to hearing from you.”

…and thank you Michael, for thinking of me.  It is humbling…

I live in Ohio, and as it turns out, I am heading to San Antonio tomorrow.  There is an annual POW Dining In I attend every couple years at Randolph.   Our squadron, the 560th FTS, had the Honor of requalifying those who wanted to return to flying when they were released.  This will be the 40th reunion!

My cell number is 419-283-71XX.  I will have a bit of time on Friday, the 12th, then on Saturday until I head up to New Braunfels around noon – where I will be staying until Tuesday.

I had no idea what he had for me and my mind wondered!  Sure I was curious, but I felt it impolite to ask.  So, like a kid, I allowed my excitement to build…

I met Michael in a parking lot in Universal City that Friday afternoon, just before our dining in.  He and his lovely wife drove into the parking lot, and after introductions, he handed a box to me – kinda like a ‘shirt box.’  I had no idea what was in it, but as soon as I saw a bit of it, I knew.  Immediately.  It was one of Colonel Thompson’s old flight suits!  A”K2B” like we used to wear before our fire-retardant Nomex flight suits.  And it was configured with the patches we wore when I went through UPT. 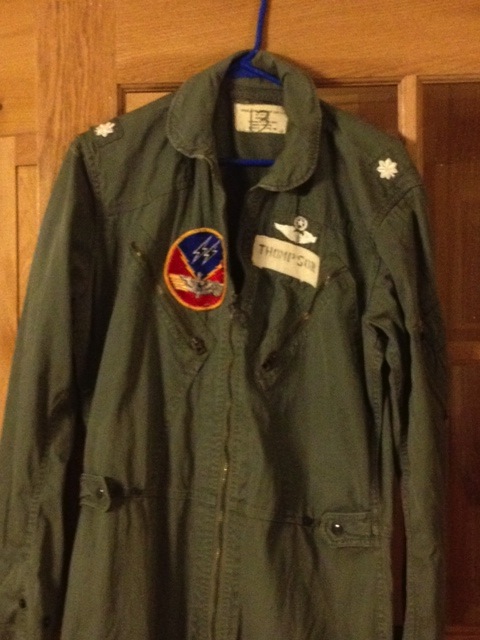 A 40+ year old flight suit.  What’s it mean to anyone?  Who knows – but to me, a great deal.  It represents a part of my past; something of a man I admired, and tried to model myself after.  Like I said, I only had a brief encounter with Colonel Thompson, but he did “touch me” – in a very positive way…

I stood there in that parking lot last week – kinda speechless.  Then I began “babbling” for I could feel the lump in my throat and the tears beginning to form.  “Thank you” felt hardly enough for Michael’s act of unselfishness… but, I am grateful.

Later that evening at a friend’s house, I brought in that box, told the story, and showed a few guys of my ‘vintage,’ the treasure inside.  Each one of them just knew what it meant to me, and soon the stories of wearing old ‘K2Bs’ began flowing!

When I got home I dug out an old’ K2B’ of mine.  The outline of my patches are still there, and still I have a few of them – my class patch, name tag and squadron patch.  When I find suitable rank and an American flag patch I’ll have it fixed up and then I will find a way to appropriately display the two together.

It’s rare these days to find men like Michael – and it is also so refreshing!