“Look Out My Window?”

I was hired at Northwest Airlines in Jan. 1989.  Initially I was thrilled to be working at NWA.  Flying was a “skill set” that just seemed to come to me, and on ’89 I felt I was “set” for the remainder of my working career.

As I learned more about how the airlines actually worked, I became somewhat disillusioned.  Every year I saw where the “authority” of Captains was being continually eroded, yet they were still being held “responsible” for the safe and efficient operation of their flights.  This trend indeed, continued until I retired in Jul 2006.

On 8 May 2006 I was the Captain of NWA 410 from Dallas, TX to Mecca – ahhh, sorry, Minneapolis, MN.  There was ‘weather’ forecast enroute, but not anything “out of the ordinarily.”  A weather “system,” running South to North,” was slowly working it’s way East, as is common in the Spring.  After level off I could clearly see the pattern on our radar.  It was very well defined, and didn’t seem to offer any problems for us.  We would just have to pay attention, and work our way though the cells.  I had done this literally thousands of times, as we all have.

As we got further North I heard a “ding” and looked down to our company communications system.  This is the message I received: 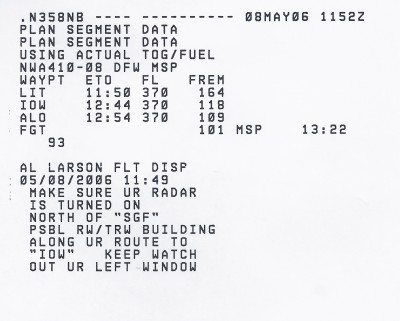 Initially all I could think was, “Really?”  Why would “Headquarters” think I would be flying into a forecast weather systemwithout my radar on?  Then, ‘they’ felt I had to be told to ‘look out my window!’  YGBSM!  (“RW” the international weather code for rain showers; “TRW” is thunderstorms.)  Look out my window?  And you want to know why I refer to these morons as “shoeclerks?”

Once I settle down from my indignation, I see something more.  This is a great illustration for what I mentioned at the beginning of this post.  The dispatcher was “covering his ass.”  With this message, he was “covered” if anything happened to us during the ensuing portion of the flight.  The ‘lawyers’ would have a clear shot at me if  anything happened to us.

I think I submitted my retirement papers shortly hereafter, and haven’t regretted it a bit…

“Look out my window!”  After 35+ years of flying, I wonder if I would have thought of this on my own…

This entry was posted in At the Airlines, Shoeclerks. Bookmark the permalink.

1 Response to “Look Out My Window?”