I Got to ‘Stick My Hands Under Mike Webster’s Butt, One More Time’…

Years ago I happened to hear Terry Bradshaw’s induction speech into the NFL Hall of Fame.  As he was speaking, he hesitated a moment, looked up to the heavens and lamented, “What I wouldn’t give to stick my hands under Mike Webster’s butt – just one more time…”  Mike Webster was the Steeler’s All Pro center from 1974 – 1988.  He played with Terry Bradshaw when the Steelers won four Super Bowls in the ’70s.  There was something about the way Bradshaw said what he said that day that resonated deep within me.  I didn’t know what it meant until many years later.

In the late 1990s I was invited to speak at the USAF Resident Flight Surgeon’s course at Brooks AFB, TX.  I spoke on how pilots hide their alcoholism from flight surgeons.  It really isn’t hard; we just either lie to them, or we ‘withhold’ information from them.  My objective was to give these folks some insight into an alcoholic – from an alcoholic’s perspective vs. that of a clinician, or commander, or someone from “Social Actions.”  Over the years I lectured on course I got a lot out of it.  And from the feedback I received, I think I was able to offer some ‘clarity’ on the nature of the disease – on how alcoholics think.  Our brains just aren’t wired like you ‘normal’ folks.

During one of my presentations I came to a point where I thought about all the years I flew the T-38 drunk – not necessarily “drunk” physically, but certainly drunk emotionally and psychologically.  I thought about my alcoholism, and my subsequent recovery and that is when Bradshaw’s comment came back to me.  I stood there on stage for a moment, then lamented myself, “Oh, what I wouldn’t give to fly that jet (the T-38A) just one more time, sober.”  And wouldn’t ya know it, one of the young residents was paying attention!

In May 2006 I was invited to Columbus AFB, MS to give a series of presentations on my drinking experience to the IPs and students.  Over two days I gave seven lectures; and they gave me a ride in the T-38C!  Way beyond my wildest beliefs!

After lunch I went through seat training.  It was if I had never left; everything was so familiar.  Then I had to take a mini physical.  I was afraid my heart might be racing too fast, but it was fine.  Then it was down to the squadron to meet my IP, and the briefing.

I could hardly focus through the briefing; I had given and heard so many of them before.  That done we headed off into the ‘chute room.  Again, it was just like yesterday.  First the anti-G suit, then the helmet checkout and finally the parachute fitting.  I loved every moment of it!  Then we stepped to the jet.

Once we got to our jet, we did a walk-around, then posed for “Hero” shots. 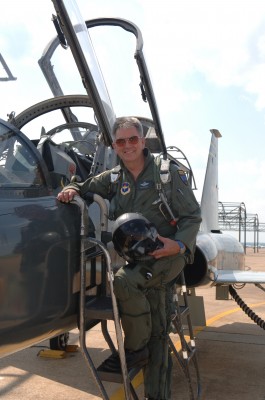 After pictures were taken it was up and into the jet.  And again, it was if I had never left.  The feel, the smells and the sounds were all too familiar.  Strapping in was a blast.  I was just loving it, struggling to keep what little composure I had.

Engine start, taxi and takeoff were just as I remembered from 18 years before.  On climbout my IP had to turn the air conditioner to full hot – to blow out the moisture in the system.  I had forgotten all about that, and it felt so uncomfortable, and yet, so good!

The T-38″C” model we were flying is an updated version from the “A” model I flew.  Performance wise, it was about the same.  The differences were in the instruments.  We had a ‘glass cockpit’ now; all digital.  I felt like the RCA dog, staring at a TV!

It was over all too soon, certainly before I was ready for it to be over, and we had to head for home.  But not before I felt the sting of sweat dripping into the corners of my eyes, and stinging the hell out of them.  I was tempted to raise my visor, and wipe the sweat from my eyes, but I decided against it.  The stinging was just too sweet!

The recovery was uneventful and my IP flew a couple-3 patterns to low approaches.  Then it was time to call it a day.  “Base, Gear, Stop,” and we began the final turn.  I just sat there as I had many times before, with my arms resting on the canopy rails.  What a thrill!

Rolling out on final, 155 knots, 3-green and flaps, and now in the flare.  Just about like that, and soon the nose was falling from the aerobrake.  Rollout, clearing the runway, pins and canopies.  We punched the intercom off and dropped our masks.  I just loved it!

As we taxied in I couldn’t help but feel a flood of emotions.  Gratitude, pride, and humility among them.  I was so grateful that I didn’t hurt anyone during the years I drank, and flew the T-38.  I was also “quietly proud” of the realization that, at one time, I wasn’t ‘half-bad’ in the jet.  And, I was humbled that I had been so fortunate so as to have flown for the United States Air Force for as long as I did.  It truly was a privilege, and an honor for me to have done so.

When we taxied into the chocks and shut down, the realization of it all then hit me: I had just stuck my hands under Mike Webster’s butt, one more time!

And today, I am so grateful for that experience…

This entry was posted in Uncategorized and tagged Spirituality, USAF Flying. Bookmark the permalink.