About 10 years ago I was on my way home from De-troit when I spotted a sign alongside the road, “Free Kittens.” I thought to myself, “That sign captures the essence of why I live in the country!”  “Free Kittens,’ unattended vegetable stands, neatly manicured farm yards – it all goes toward why I choose to live in the country.  We also don’t suffer the wrath of ‘Home Owners Associations’ out here!  But I digress…

As I continued on my way home that afternoon I thought to myself, “What do I have that I could give away?” As I began thinking about it, more and more, it dawned on me: moles!  I have plenty of moles I could give away!

So the next day I went uptown to our local sign maker.  When I explained my idea to the gal, she asked, “Do you really think people around here are that “stupid?”  I thought about it for a moment, then replied, “Not the folks who are ‘from’ Whitehouse;’ but some of the ones who have moved out here from the ‘Burbs,’ for sure.”  “And a few others,” I thought to myself… It wasn’t long before I had my sign: 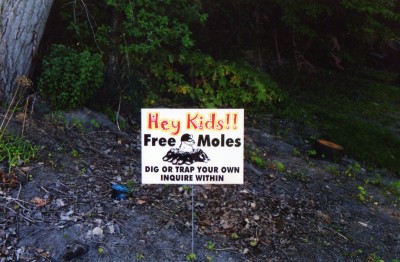 It wasn’t long after it went up that I began getting “feedback;” all positive.  I also began to notice folks slowing down as they passed my house, to read my sign.  On occasion someone would stop, get out and take a picture of the thing.  I never knew a $25 sign could bring so much entertainment!

Then one Saturday morning I saw this van coming up my driveway.  I watched as it parked, then I saw a young gal get out from the passenger’s side and unstrap a toddler in the back.  That was about the time I got out front myself.

There is a reason I don’t play poker.  It must have been all over my face: YGBSM!

“Oh, is that sign a ‘joke?'” she asked.  It was at this time I noticed her husband in the driver’s seat, just shaking his head.

As she began stuffing the kid back in his car seat, I replied, “Yes mam, I am not well…”  And they soon drove off.  At least I had the courtesy to wait until they got partially out the driveway before bursting out laughing!

Over the remainder of the summer I had two more young gals come to the house, wanting to see the moles!  Unbelievable.  When the second gal showed up with her boyfriend, I was ‘prepared.’  I had placed two lawn chairs off to the side of my yard.  I told the pair that the moles would be running soon, and that they were welcomed to sit and watch.  I really wanted to get their picture, sitting there, staring at a mole trail!  They declined – damn!

I also received a note from a nun around the corner.  She was very gracious in telling me how much she enjoyed my sign; although some of the others “didn’t get it.”  She also provided a  recipe for cooking wild game…

I left that sign up for the better part of the summer; then someone stole it!  That’s when I knew, “civilization” was coming to the country, to Whitehouse…

This entry was posted in Pranks, Signs. Bookmark the permalink.