And so when Christmas rolled around in 1984, one of my guys in Stan/Eval was having a party.  He came to me and asked if I would be willing to play Santa.  My first thought was, “Will this Santa suit make my ass look fat?”  Then I thought, “Hey, this just might be fun,” and so I agreed.

The party was held on a Friday night, somewhere around 2030 hours (that’s 8:30PM in ROTC time).  I told Sue to go ahead and head on over to the kid’s house; that I would be along soon thereafter.  That gave me time to get dressed, and have a few “pops,’ to prime the pump.

I had an idea where the kid lived, but not exactly.  “However,” I thought to myself, “with a lot of cars parked around a specific house in a small housing area, how hard can it be?”  So off I went.  Ho, ho,ho…

It didn’t take long before I found his place – “Ahhh, you clever one, grasshopper,” I thought to myself.  I got out of my car, and picked up the bag of ‘goodies’ I had put together – and I headed up to the door.  I didn’t want to go in empty handed – it was Christmas after all.

As I got closer I could hear the festive Christmas music and chatter coming from inside the house.  I opened the door, and called out “Ho, ho, ho,” as I stepped in.  This was followed shortly thereafter by a “Holy crap!” under my breath – I was in the wrong house!  I didn’t know a soul!

“Merry Christmas Santa!” someone else yelled.

“Santa, would you like a drink?” another asked.  Boy did I ever!

Soon there was a Budweiser in my hand and I became caught up in it all.  I took a seat and began handing out gifts.  It wasn’t long before some gal was sitting in my lap, and I was having a ball!  But then it dawned on me that I still had many miles to go before I was done for the night…

I got up, thanked everyone and wished them all a Merry Christmas.  Then I was on my way.  I eventually found the party I was suppose to be at; I knew this because Sue was there.  And that was that, or so I thought.

A week or so later Sue came in from work and asked, “Exactly how many Christmas parties did you go to the other night?”

“Why?” I asked, knowing it best not to admit to anything without background info.

“Well,” she continued, “the postman at school gave me this picture.” 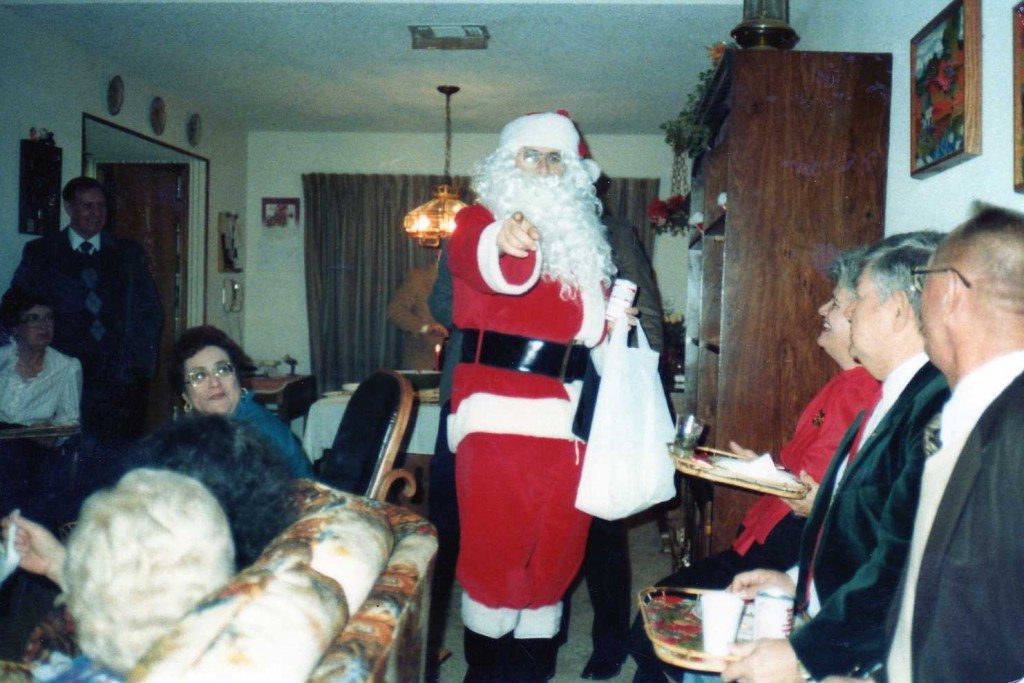 Yep, that’s me, and I can’t tell you who anyone else is!  Wouldn’t have a clue!  But everyone seems to be having a good time…

I think today this would be called, “Busted!”  Until I saw the picture, I had forgotten all about the visit… then I had to laugh.  It was pretty funny; but then I suppose you had to have been there.

This entry was posted in Drinking, Happy Hour. Bookmark the permalink.