1.9 from Dyess to Randolph?

After I relinquished command of my squadron, just before retiring in 1988, the DO (Director of Operations) told me, “Well, since all you seem to enjoy is flying, that’s what we decided to let you do for your remaining time in the Air Force.”

“Well Hell,” I thought, “why didn’t I apply for retirement 2 years earlier?”  LOL!

I did love to fly, and I loved working with ‘the young kids’ – both the students and the young IPs.  I loved asking them questions that made them think.  I loved talking training ‘philosophy,’ and challenging them about their follow-on career options.

One of the “good deals” I had was flying in the B-1 “fast-mover” orientation program at Dyess AFB, TX.  This was a program where we gave the new B-1 pilots 4 rides in the T-38 to acclimate them to the higher speeds and stresses they would be encountering with their transition to ‘the Bone.’

Dyess is 180 air-miles from Randolph.  Flying at .9 mach, 9 miles per minute, the flight plan called for about 20 – 25 minutes of flying.  Hardly worth the effort of strapping in.  With my retirement looming on the horizon, I decided to take a “Texas tour” on the way home; I decided to head West after takeoff (instead of South.)  This is my flight plan from that flight: 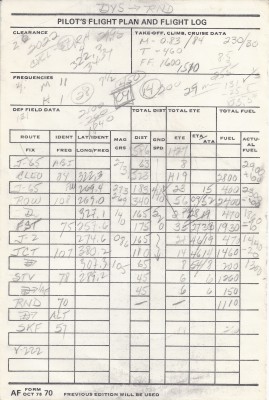 When I got to Randolph there was little-to-no traffic in the pattern and I had a ‘little gas’ remaining, so I decided to ‘shoot a couple patterns’ before landing.  Man, that was fun!

As much fun as I was having, all good things eventually come to an end.  When I got to the chocks and shut down, I had about 700 pounds of fuel remaining.  (Our minimum was 600 pounds.)  All-in-all I felt good.  And wouldn’t you know it, it was 1730 hours – Happy Hour!  So, naturally I headed over to the Auger Inn.

I hadn’t been in the Auger, maybe 30 minutes or so, when I spotted the ADO, (Assistant Director of Operations) bearing down on me with a very focused look on his face – and not a very pleasant ‘very focused look.’

(I knew he was “gunning for me;” I felt it ever since he arrived at Randolph a year or so earlier.  He was a “fast burner,” as rising star, and I wasn’t impressed.  I saw right through him from the very start, and I think he sensed it.)

“Well Sir,” I began, noting the smoke beginning to emerge from his ears, “I knew this was probably going to be my last solo flight in the jet, so I decided to savor it.  And, for 6 years now I have sat in staff meetings where Maintenance continually talks about the high-rate of brake wear.  So, with the high ambient temperature out there this afternoon, in the low 90’s, I decided to “lower my landing speed” by burning off fuel before I landed – hence conserving brake wear.”

He knew I was “packing sunshine” up his ass, and there was nothing he could do about it – I did nothing illegal.  Well almost.   It never occurred to the dumb shit that I climbed to FL 430 for the flight home.  I don’t think it ever would have dawned on him – he was a “glad-hander,” not an aviator.  Anyway, he stood there for a moment, fuming, then realizing there wasn’t anything he could do, he turned and left… none the wiser.

I am still ‘tickled’ with this story…LOL!

This entry was posted in PIT, The Book, War Stories. Bookmark the permalink.